Fly tipping analysis for London and England in 2020

What is fly tipping?

Fly-tipping is the illegal dumping of waste on land or in water, and it is a serious issue for our local areas and the environment. We used our back-end data to analyse the boroughs of London and other regions of England. Here are some interesting statistics about fly-tipping in England and London.

According to Defra, almost 1 million (976,000) fly-tipping incidents were reported by councils in England in 2020. A figure which btw excludes waste fly-tipped on private property because that falls outside the councils’ responsibility. So, whatever you read after this point, don’t forget that the problem is much worse!

Of those million or so fly-tips in England, about one third took place in London. This is equivalent to 1,000 occurring in London every day of the year.

This blog looks at whether this figure is worse or better than the rest of the country, how fly-tipping differs by borough, and whether the price a council charges its residents for bulky waste collection impacts behaviours.

Comparing analysis of apples with apples

Since fly-tipped waste is mainly comprised of stuff thrown out – like a sofa or mattress or items generated from improving the home, like some builders rubble or an old toilet, it seems sensible when comparing regional differences that we adjust the figures to reflect the number of underlying households.

So we took annual fly-tipping incidents by region and London borough and divided them by the latest ONS data for the number of households (which is a bit out of date but not by much) in that region. This analysis creates a ‘fly-tip per 100 homes’ rate – so we can start to compare apples with apples.

London has an average statistic of 11 fly-tips annually per 100 homes, compared to a national average of 3. Therefore, the challenge in London is over 300% worse than in the rest of the country.

Fun fact – since London has more than one fly-tipping incident per year for every 10 London homes and assuming you (dear reader) are not a fly-tipper, on average, one in nine of your neighbours is a fly-tipper!

Map of rates in England by region in 2020 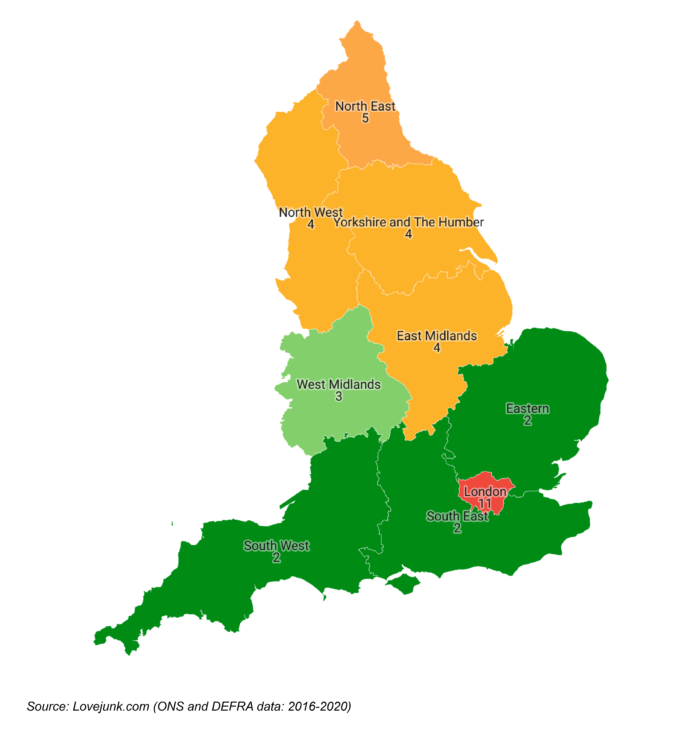 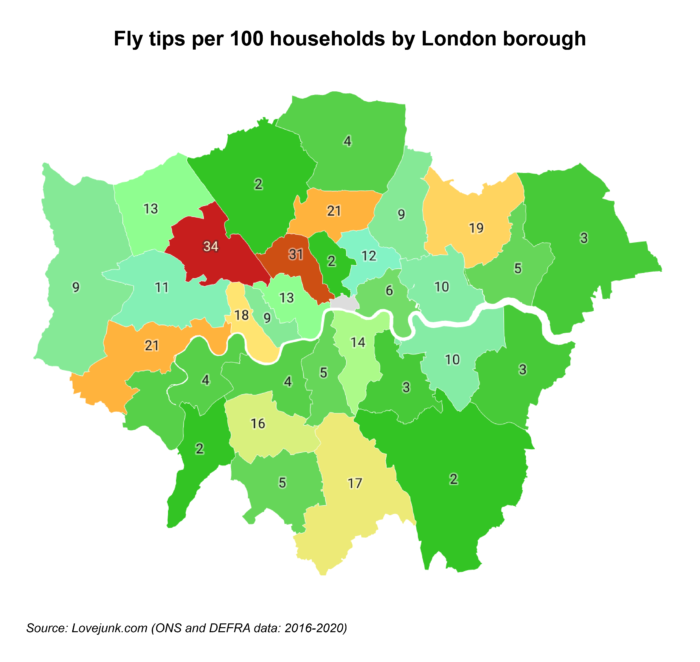 Conclusion of our fly tipping analysis in England

Instead of encouraging councils to reduce bulky waste collection service fees, perhaps it would be better to concentrate on what boroughs like Islington, Bromley and Barnet are doing to achieve such low rates, then look to apply these lessons elsewhere in the country.