If you are interested in a regional analysis of fly-tipping in England, welcome! You are in the right place.

This blog covers a detailed regional analysis of fly-tipping in England based on the latest Defra statistics. London recorded the highest fly-tipping rates, more than double the national average of 20. The North-East was not far behind, with the total number of fly-tipping incidents increasing by 27%.

Below we have collated a table showing the regional breakdown of fly tipping rates. 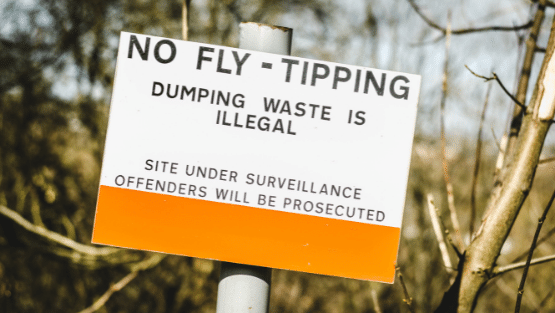 In 2020-2021 England recorded 1,134,000 instances of fly-tipping. This represents an overall increase year on year of 16% and is equivalent to 20 fly-tips per 1000 people. However, if we look beyond this and hone in on the performance of different regions across the UK, the story is far more complex.

London recorded 43 fly-tips for every 1000 residents. A fly-tipping rate that was more than double the national average of 20. As a result, London was responsible for 34% (1 in 3) of all fly-tipping incidents in England from 2020 to 2021. This is despite Londoners only representing 16% of the total population.

The North East region was not far behind London, with the second worse rate of fly-tipping per population. Last year it had 31 instances per 1000 people and also saw its total number of incidents increase by 27%, from 64,000 to 82,000.

The biggest year on year increase came from the South East region, which grew from 91,000 instances to 121,000. An increase of 34%. Although, it still remains well below the national average rate of fly-tips per 1000 residents, at only 13.

The East and the West Midlands also saw a jump, growing 30% and 28%, respectively.

The most improved region was Yorkshire & Humber region which had a 2% fall in fly-tipping incidents. Great job!

The table below shows the twenty local authorities with the highest fly-tipping rates. As you can see, this table is dominated by London boroughs, with the City of London authority at the top of the list. This is not so surprising given its proximity to so many people and buildings. Northampton in the East Midlands had the highest rate outside of London.

GET MY BULKY WASTE COLLECTED

The table below shows the local council authorities with the lowest fly-tipping rates per population. It's clear to see from this that the standout winner is Oadby and Wigston, which reported only nine instances last year despite a population of 57,000.

Oadby and Wigston, we salute you!

Fly tipping is a serious issue for our local areas and the environment. As well as being an increasing source of pollution, it is a potential danger to public health and a hazard to our wildlife. Local authorities are struggling under the pressure to keep this ever-growing issue under control. However, it is worth mentioning that the LoveJunk marketplace solves this issue for you!

For a more visual representation, check out our interactive fly tipping map for England, which analyses every local authority, council, and region of England. This map shows rates of fly-tipping per 1000 residents and is based on the latest Defra statistics.

Fly-tipping is a filthy business, but join us in clearing it up.

Thanks for reading! We hope you found our fly-tipping to England guide useful. If you’re looking for safe and speedy bulky waste removal and disposal, we definitely recommend using the LoveJunk marketplace. We are on a mission to end fly-tipping. For any questions, please don't hesitate to get in touch!